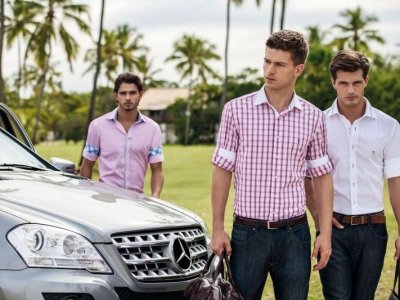 1. Lend Him Your Products

When you're wondering how to get him to care about his appearance, try lending him your products to try. Some men don't use personal care products because they think it's not masculine, or they would be embarrassed to be seen buying a moisturiser. Let him try your products out and he might get hooked on cleansing and moisturising!

Society is still largely geared towards the 'pink for girls, blue for boys' attitude, so men may think that personal care products are not for them - that's a 'girly' thing. If your guy is too embarrassed to use 'girly' products, get him some items in more 'manly' packaging. Yes, a moisturiser is the same whatever packaging it's in, but he might feel more comfortable using it.

Guys love compliments just as much as women do, but they aren't used to receiving them. How often do we tell guys they look good? So pay him compliments. The more he gets used to hearing them, the more keen he'll be to look after his appearance. Try comments like 'Wow! That really suits you'.

However frustrated you are that he doesn't 'make an effort' when you go out, try to avoid complaining about it. He'll probably feel that you're nagging, and be even less inclined to smarten himself up. He might even go out of his way to look a mess just to spite you. Positive reinforcement is much better.

Sometimes you have to resort to devious tactics to persuade your man of the benefits of caring about his looks. Pretend that you've read in a magazine article that his favorite actor/player uses products or has facial treatments. You could also buy some products and tell him you won them!

6. Appeal to His Vanity

Clearly your guy isn't vain if he doesn't worry about his appearance. And you wouldn't want him to go to the other extreme and think he's God's gift to women. You're looking for a middle ground, so appeal to his vanity. Get him to cultivate an interest in looking good.

Sometimes you have to be devious to get men to do what you want. And a subtle reward could be just the way of achieving that. Imply that he'll get rewards if he smartens himself up - say something like 'You look so hot when you wear that blue shirt I bought you/ style your hair' or 'you really turn me on when you're wearing a suit!'

Encourage your man to make the best of himself with these tips. Before you know it, he'll be spending more time in the bathroom than you do! These days, many men are spending as much on products and grooming as women do, and nobody thinks anything of it. It's fair enough! Is your man a metrosexual, or does he only own soap and shampoo?