7 Ways Beauty Has Changed Throughout History ... 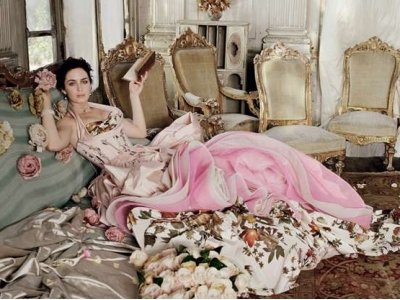 The ways beauty has changed throughout history is quite astounding. Many of the trends we fall over ourselves to achieve today were no-nos less than a century ago. In contrast, there was a point in time where we engaged in THE weirdest practices. I am sort of grateful for the ways beauty has changed throughout history, but I do wish other trends would make a return...

1 Tans Were a Faux-pas

One of the biggest ways beauty has changed throughout history is the acceptance of tans. From Queen Elizabeth I's dedication to being pale to women of the 1920s, tans just were not done. Why? Because, being tanned was a sign you were a working class woman who had to spend time outside. Thankfully classism has taken a massive nose dive, so tans are all the rage.

2 High Foreheads Were in

High foreheads were SO in during the late-medieval and early modern period, women would pluck their hairline to achieve them. Elizabeth Woodville was particularly well-known for her beautifully high forehead, as was Anne Boleyn, and Elizabeth I. Poor old Anne of Cleves' was a little small. I do wish this one would return, because my forehead is high. Until it does, I'll stick to my side bangs.

If you wore make-up, you were a massive hussy. This would be a problem for me, because I cannot go a day without mascara. Or foundation. Or blusher. Anyway, many women would wear a little to cover their imperfections, but the name of the game was secrecy. No decent woman would wear make-up, otherwise she was suspected of being a prostitute.

4 Lots of Blush Was Acceptable

Take a good old look at the women of 18th-century Europe and you will see lots of blush. Marie Antoinette, Caroline of Ansbach...they were all at it! Now I'm not just talking about a pre-teen-style blush oversight. I am talking about absolute, deliberate, massively rouged cheeks. I could take or leave this one.

5 Lead Was an Asset

Until the late 19th and early 20th century, pale wasn't just about staying indoors. Women would go to extraordinary lengths to achieve that porcelain look. One woman who was famous for said lengths was Elizabeth I, who coated herself in lead. According to less favorable accounts of this red-headed beauty's appearance, her skin was extremely cracked by the end of her life. Fortunately we have face paints now, should we wish to look a little ghoul-like.

6 Bouffant Hair Was a Little Extreme

Nobody did bouffants and beehives like the Georgians. To achieve this, they'd gather hair from around their household, create a little (or big) ball with it, and build their hair around it. Hair during this period could easily add an extra foot or so to someone's height. I'm not sure I could handle oversized hair. Chignons are enough of a challenge for me.

7 Curves Were All the Rage

Forget Size-0, curves were all the rage until the mid-20th century. A lot of this was down to the activity levels of women until the post-WWII era. Following WWII, a lot of governments realized the benefits of encouraging women to work out and engage in sports! I love the health benefits that have come with this, but I'd also appreciate the return of curve appreciation. To me, it seems as though the media has been called out on photoshopping a lot lately, so there is hope yet!

Historic beauty trends (hopefully with the exception of lead), are bound to make a return at some point. In a weird way, I wouldn't really mind outrageous blush--at least to see what other people would look like with it on. You never know, beauty might even get stranger. If you have a historic beauty trend you love, please share it here!