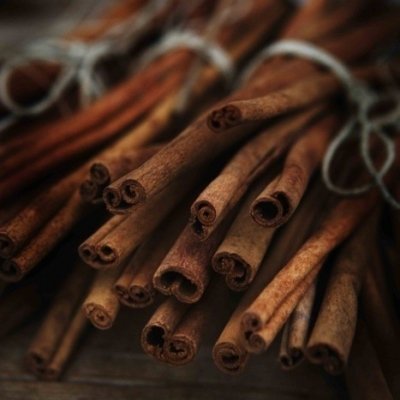 Cinnamon is a delicious spice and you probably know it has some great benefits for your health, but did you know you can also use it in your beauty routine? Those same anti-bacterial, antifungal, antioxidant and analgesic properties that are good for your inside body are good for your skin too. This means topical application is just as good as ingesting cinnamon. So, listen up my gorgeous girlies, ‘cos here are some ways to use cinnamon in your beauty routine.

Looking to brighten up your face a little in the winter months? Try this little trick. Combine cinnamon, nutmeg, corn starch and cocoa powder and mix together. Dust a little on your hand to check how it looks; if you need a darker shade simply add a little more cinnamon, or mix in more corn starch for a lighter shade. Then use as a bronzer.

If you’re a redhead then you might want to listen up to what cinnamon can do for you. Brighten up your red locks by adding cinnamon to your conditioner and then wrap up your conditioned hair in a shower cap (or plastic bag at a pinch!). Leave your hair like this for about 6-8 hours, ideally overnight. In the morning rinse the conditioner out and you’ll have bright and beautiful hair.

Cinnamon is full of rich healing properties that help to fight infections. Drink a Ceylon and cinnamon tea for a couple of days and introduce cinnamon into your diet when you have a yeast infection. You can sprinkle it on porridge, or on peanut butter on toast- sounds like a pretty tasty way to get better!

Now it is going to be pretty tough not to lick the homemade lip balm off your lips, but if you can keep it on for long enough you’ll earn a gorgeous pout for your efforts. Add a tablespoon or two of cinnamon to melted coconut oil. Once the coconut oil is set you will have your very own (and very tasty) homemade lip balm.

To get your face bright and glowing, mix together two tablespoons of cinnamon to three teaspoons of corn starch. Dust your big blusher brush with the powder to give yourself a healthy glow. You can adjust the color of the face powder by adding more or less cinnamon to the corn starch.

Give your face a good old clean with a simple homemade cinnamon scrub. Combine sugar, cinnamon and coconut nectar. Rub your face with the mixture gently, then rinse the scrub off with warm water. You will be left with a soft face that you won’t be able to stop stroking!

Run out of toothpaste? Have a hunt around the kitchen and look for a teaspoon and some cinnamon - I mean who doesn’t have cinnamon in their kitchen cupboards?! Mix a spoon of cinnamon with warm water and gargle for a few seconds. Your breath won’t be minty fresh but it will be much improved.

If you suffer with acne scars then mix up honey and cinnamon to revitalize your face. Combine the two ingredients and apply it to the affected areas. Leave the mix on for about 15-20 minutes and repeat once a week or so. This combination will help to fade the scars and the antibacterial properties in both the honey and the cinnamon will reduce future breakouts.

If you have oily skin then this is the cinnamon use for you. The oats in the mask helps to reduce the oil in your skin and absorbs any existing moisture. Combine cinnamon, oats and lemon and apply to your face. Rinse with warm water after about 20 minutes and you’ll have fresh oil free skin.

So off you trot to the kitchen now to check whether you’ve got a stock of cinnamon. And if you’ve got some other wonderful uses for ci9nnamon that makes you beautiful, please share.